Im back in Lisbon after a few amazing days in London…

We spent our last day in London walking in Hyde Park and we made a short visit to Harrods.

I have been reflecting over my race and as promised here is a race review with some reflections.

We woke up at 4:30 am sunday morning as i would start at 7:25 am. It was cold and dark outside. We left the hotel at 5:30am and it couldnt be more than 8 degrees outside.

As i was only racing in a swim suit i had bought a tight sport shirt the previous day to protect me from the cold.

I entered the transition park to check my bike and leave my running shoes. It was a beautiful morning in Hyde Park and i was looking forward to the race, i was feeling ready.

Mum and Dad were there early and exited to see my race. 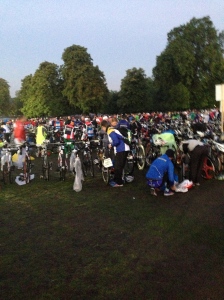 The swim had been cut to 750m due to the cold weather conditions. This didnt bother me at all. I was actually quite happy that they had cut the swim.

The swim went quite well and i was the 7th girl out of the water. The run to the transition park was long and i managed to pass some girls.

I did a good transition and i was out on the bike. After 5km i was among the leading group. The race was a non drafting race (you couldn’t ride in a group). But i would say that the rule was not quite followed. We were 6 girls in the small group leading the race. I made sure that i was in front when i passed mum and dad 😉 The bike course was absolutely amazing. We passed Buckingham palace, down towards Tower bridge. They had closed down the main streets of London just for us, WOW!!

I was feeling very good on the bike, the 40km passed very fast. I did an average of 37km/h which gave me a total time of 1h05 on the bike. When approaching T2 i knew that the medals were going to be decided during the run…

I was the first girl to enter T2 and i ran as fast as i could to my spot in the transition park. My feet and hands were freezing. It took some time to get my running shoes on. Eventually i managed and i headed out on the run…

We were going to run 3 laps around the Serpentine. When you start the run after the bike you can almost tell directly if you will be able to do a good run or not. On sunday my legs were feeling ok, but i didnt have the perfect flow and i knew that it would be hard to reach the medals.

I kept a steady pace till the end and as you already know if finished 7th out of 77 girls which im very proud of 🙂 The girl that won did 35´50″ on the run and i knew that no matter how fast i would run she was out of my league.

Im not there quite yet! 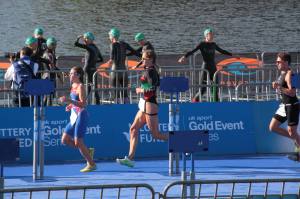 So, conclusion! I did my very best and im very happy with my result! 🙂

The days in London were simply amazing a memory for life… 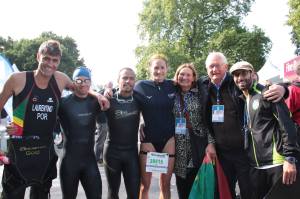 A big thanks to mum and dad for yr amazing support. It was very special to have you there with me.

To André, my lovely boyfriend and coach, could not have done this without you.

Now its time to sleep, tomorrow ill be in the pool at 6h45.

Next stop on the race calendar is Lisbon, the final of the National Championship