We did a 6th place among 42 teams, not bad…The team did 14th place last year

We left Lisbon 7am Friday morning with a ten hour trip ahead of us. The first hours passed fast and we had a good time in the car. 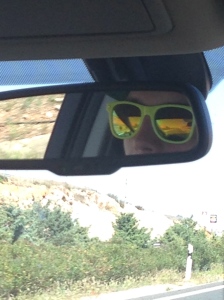 Towards the end it was hard. I think all of us were tired of sitting in a car and we just wanted to arrive.

When we finally arrived to our destination it was time to find our hotel and that was not easy. We had a name of one hotel, but when we asked for our reservation it wasn’t there. The team manager hadn’t arrived yet, so we were a bit lost. After almost one hour spent on looking for our hotel, getting stuck inside a garage we finally found our place. It was already 8pm and we had a workout on the schedule.  We went for a 30min run. My legs were feeling quite stiff after the journey.

The evening ended with a pasta dinner at our team manager’s apartment. I got to meet my team mates for the first time. I just knew one girl from my team, Estefania. She is racing in Portugal, so we have got to know each other.

Despite some language constrains (my Spanish is not that good) we spoke about the strategy for Saturday’s race. We were six girls, but only four had to finish. What i learned from this is that it’s hard to make a strategy when you don’t know the level of your team mates. What we discussed Friday night and defined as strategy didn’t happen during Saturday’s race.

The race started at 2pm Saturday afternoon. Our start was planned for 5:30pm. At10am Saturday morning we went for a bike ride to stimulate the body. We did 2 laps on the race course. The course was flat with some dangerous roundabouts. After the bike we went back to our apartment to rest a bit before lunch. I really enjoyed the relaxed atmosphere. In Portugal it seems that people stress much more on the race day.

The time passed fast and it was time for us to go and place our material in the transition park. I wasn’t feeling nervous at all. Even if i have been racing quite a lot this was a total new experience for me. I have never raced in the Spanish league nor had i done a time trial before. 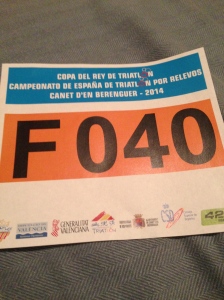 Time to race… at 5:45pm Saturday we took off. We have decided that Estefania and I would push the swim and lead the group. We didn’t really push. I did two strokes freestyle, then a few back strokes. At the second buoy we had to stop and gather the team. The run to the transition park was long, but my legs were feeling great. The strategy for the bike was that Monica, another girl from the team, was going to push as she was a good biker. I would just go on the wheel and rest. That didn’t happen. I took control of the bike directly and pushed the girls. I was feeling great!!! When i looked back i realized i had pushed it too hard, the girls were losing my wheel. I had to slow down, get the group together and go again. I told the girls to scream “more” or “less” so i knew if the speed was good or not. I pushed the entire bike and i was feeling great. I had the feeling that i could go much faster if needed. After the race the girls came to me and told me “Larsson, yr not strong, yr a machine on the bike” 😉

In most races when i push hard on the bike and arrive to the run quite tired, but this wasn’t the case. My legs were feeling even better after the bike and i would have loved to push that run as hard as possible. However, this was not an individual race and we had to make sure that the team stuck together throughout the run.

Monica was not supposed to run, however the girl that was supposed to do the run, Judith, had a flat on the bike and plans changed again. Monica was suffering a bit off the bike and we had to support her throughout the run, she did a tremendous effort to keep the pace.

Sunday, to end our great weekend, we went for a two hour bike ride before starting the long journey back to Lisboa! 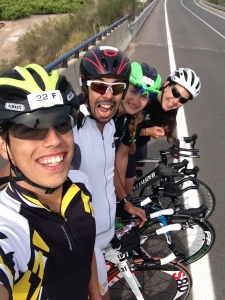 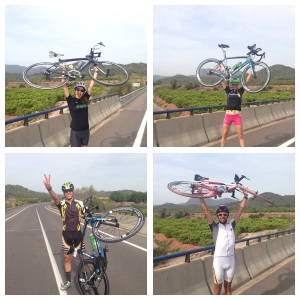 I loved the experience! Great team, can’t wait to be back

Gracias Trival Triatlon Valdemoro for giving me this opportunity