Haven’t had the time to write about last weekend’s race yet, but here is the race report.

As you know this race was quite important for me as it was one of the races that served as the qualification for the European Cup.

The start list had never been so competitive. We were 45 girls and world class athletes like Melanie Santos (11th at the junior world champs), Pamela Oliveira, 13th in the world and Brazils junior national team was among us.

Out of the water…

The swim wasn’t that good. Took the wrong direction towards the first buoy and i lost quite some time. When i left the water i was about 40 seconds behind the 2nd pack. I did a good run to the transition park and was out on the bike. The first lap was about chasing the 2nd pack. I managed to catch them during the first lap. The remaining part of the bike was controlled.

Heading to the transition park 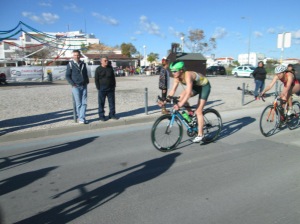 The run was quite good and i gained some positions. All my hard work is starting to pay off, finished 8th overall and 3rd Senior (3minutes behind the winner) It was an honour to share the podium with Pamela Oliveira who won my age group. Melanie Santos did a great race and won overall.

With the result from this race I’m still having my chances to go to the European Cup. I had 4 Portuguese women ahead of me. There are 6 slots for the female elite race in the European cup. I guess all will come down to the race on Sunday that will take place in Algarve. It’s the second and last qualification race. As always, I’ll go out there and give everything.

Have a good weekend!